This DArchive discusses the collaboration of DES and the IceCube Observatory in investigating the origin of astrophysical neutrinos, described in this paper: https://arxiv.org/abs/1907.07193

The “little neutral” particle, the neutrino, is among the most challenging particles to detect and study. First postulated by Wolfgang Pauli in the 1930s, and first detected in the 1950s, the mysterious lepton has intrigued particle physicists seeking to better understand the Standard Model of elementary particles. Finding methods to observe the neutrino, however, has proved to be quite challenging. Neutrinos interact so weakly with matter that they can be almost impossible to detect. For context, every second the Sun beams approximately 65 billion neutrinos per square centimeter toward Earth, and in your lifetime, only one of those neutrinos might interact with a particle in your body. Although neutrinos are more commonly observed these days (due to the development of sophisticated detectors), the physical properties and sources of neutrinos still remain largely unknown. In this paper, we seek to uncover the origin astrophysical neutrinos -in hopes of understanding more about their physical properties.

The IceCube project detects high-energy astrophysical neutrinos using light-collecting Digital Optical Modules (DOMs), which are arranged on long vertical strings buried deep in the glacial ice at the South Pole. In Fig. 1 you can see the DOMs in action, capturing light from an incident neutrino and tracking its path. Rather than detecting the neutrinos themselves, DOMs capture Cherenkov radiation emitted from the shower of particles produced through the neutrinos’ interaction with ice nuclei. The detectors are able to trace the neutrinos’ paths through the ice to suggest that they originate from a particular direction with about a degree of precision. The IceCube Observatory captures 1-2 astrophysical neutrino events per month.

Figure 1: An animation of the IceCube Observatory’s Digital Optical Modules in action. The white beads are strings of DOMs hidden deep within the ice. The teal path with the arrow is the tracking pattern of an incident neutrino: light captured early in the neutrino’s interaction with the detector is indicated with red and later arrival time is in blue. The beads show approximately where light was detected, and the relative size of a bead shows how much light was captured by a particular DOM. The digital signal of the detection is then sent up to the surface. The Eiffel Tower (324 meters) is shown for scale, as the DOMs descend 2500 meters below the Antarctic surface. Credit: IceCube Collaboration

The neutrinos detected by IceCube have extremely high energies (TeV-PeV range) -which suggest that they likely come from extreme and/or explosive astrophysical environments. Exactly which type of astrophysical environments produce these high-energy neutrinos still remains largely unknown. Proposed sources include high-energy extragalactic objects such as: gamma-ray bursts, gamma-ray blazars, star-forming galaxies, and a type of supernovae known as core-collapse supernovae. In particular, core-collapse supernovae (CC-SNe) have distinctive qualities that make them a good candidate for neutrino association. CC-SNe are thought to produce internal jets and shocks that could emit neutrinos with TeV-PeV energies. In addition to jets and shocks, SNe also produce optical light. SNe are detectable by optical telescopes that capture the same wavelengths of light that we see with our eyes. If we could see a SN that exploded at the same time and direction of the neutrino detection, it would suggest that SNe could produce astrophysical neutrinos.

The Dark Energy Camera (DECam) is the perfect instrument to test the idea that astrophysical neutrinos are produced in supernova explosions. DECam takes deep space images with a field of view diameter of about 2.5 degrees. This wide field image encompases the ~1 square degree uncertainty region that IceCube identifies as the origin of a neutrino. The project, headed by University of Wisconsin-Madison graduate student Robert Morgan, aims to use the DECam’s deep imaging to follow-up IceCube neutrino alerts in the TeV-PeV range and search for CC-SNe to associate with each neutrino event.

DES followed up two IceCube neutrino alerts received in late 2017: IC170922A and IC171106A (named after the dates observed). After receiving each alert, DECam imaged the region of sky around the alert on 6 nights spread out over a roughly 30 day period. In a process known as difference imaging, a particular region is imaged over multiple days and compared to a baseline image such that objects with variable brightness (transients) standout. In our search for transient objects, we find many other objects (aside from CC-SNe) with variable brightness, so filtering out the unassociated transients is an essential part of these follow-ups. Fig. 2 shows the objects found within the DECam field of view for IC271106A. We identified CC-SNe by applying specifically-developed criteria to the transient objects detected in the images. These criteria select well-measured objects, and those that have characteristics of an exploding CC-SNe corresponding to the date of the neutrino alert (such as a characteristic peak brightness, proper rising brightness time, and color).

After identifying CC-SNe using the selection criteria, we found that each follow-up had one candidate SN that looked like it could have the right timing to correspond with the respective neutrino alert. Though, with further analysis, we found that neither of these SNe were likely associated with either of the neutrinos. In the first follow-up, the candidate CC-SN was found far outside of the origin region of the neutrino provided by IceCube, and in the second follow-up the SN occurred at a redshift (representing distance away) that indicated it was likely not the neutrino source. CC-SNe are much dimmer than other SNe, and at high redshifts they are too faint to be detected. The limit of CC-SNe detectability is a redshift of about z=0.3, or 4 billion lightyears away. Therefore, SNe candidates observed at this limit are unlikely to be CC-SNe and are more likely a brighter type of SN (such as a Type Ia SN), which would still be observable at this redshift.

Although it was exciting to identify at least one CC-SNe candidate in each follow-up, it was not completely unexpected given the average rate of supernova occurring in the Universe. In addition to applying our selection criteria on real data, we also tested it on simulations of SNe. Through these simulations we found we should expect that roughly one unassociated SN should slip through our quality cuts given the current sensitivity of our data. So our result in each follow-up was well within our expectations.

With these results in mind, we sought to understand the number of follow-ups necessary to be able to make a statistically significant claim about neutrino association. Like playing the lottery, every time we follow up a neutrino alert, we increase our likelihood of eventually “winning” and capturing an associated CC-SN, even though it is unlikely we will find an associated CC-SN in a singular follow-up. Unlike the odds of the lottery, our results were pretty optimistic: we found that it would take ~21 follow-ups to have a decent chance of capturing at least one CC-SN with an associated neutrino.

We will continue to follow up IceCube alerts, hoping to catch CC-SNe ‘in the act’ of producing cosmic neutrinos, and possibly show that they are the dominant source of high-energy neutrinos in the cosmos. 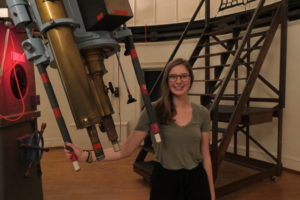 Jacqueline is an undergraduate researcher at the University of Wisconsin-Madison. She is a member of the Keith Bechtol Research Group and works on a project that uses DES data to search for optical transients in response to IceCube neutrino alerts. She is interested in studying stellar and galactic evolution through optical surveys. In her free-time she volunteers at the Madison’s historic Washburn Observatory and participates in astronomy public outreach events. Aside from astronomy, she enjoys running, hiking and bouldering. 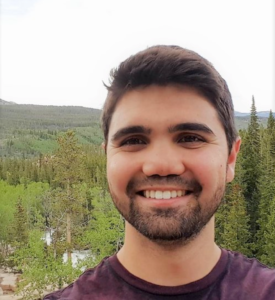 Rob is the lead scientist on the Dark Energy Survey’s IceCube Follow-up Program. He is a Ph.D. student at the University of Wisconsin-Madison where he is advised by Keith Bechtol, and this is his first graduate school paper!

From analyzing raw images to time-series characterizations of objects’ brightnesses and colors, Rob works on finding the best way to determine the properties of objects detected by optical telescopes. Rob specializes in optical transients, like supernovae and other things with varying brightness, and spends most of his time applying machine learning algorithms to classify transient objects. In his work, Rob often simulates large populations of astronomical objects and searches for applicable archival data to train the machine learning classification algorithms he employs. On top of using these techniques to look for counterparts to IceCube neutrino alerts like in this work, he is part of a team in DES looking to identify optical counterparts to LIGO gravitational wave alerts using similar machine learning techniques. Check out more of Rob’s work on his website!

Ross is the editor of this Darchive. He is a postdoctoral researcher at the University of Wisconsin-Madison. He works on various projects studying the large-scale structure of the Universe using the millions of galaxies DES observes. These projects include galaxy clustering, correlations of structure with the cosmic microwave background and using the structure of the Universe to infer the redshifts of galaxies. Ross also coordinates Education and Public Outreach efforts in DES, including managing the darchives and social media.