Scientists Leverage HPC and AI to Wrangle the ‘Galaxy Zoo’

The research team developed a new approach to classifying these hundreds of millions of galaxies. Instead of relying on crowdsourced classification, the researchers used knowledge from the state-of-the-art Xception neural network, combined with the datasets generated by the Galaxy Zoo project, to train its deep learning models. They then applied the trained model to galactic images from the Dark Energy Survey (DES) – where it achieved a 99.6% accuracy in identifying spiral and elliptical galaxies.

It took three sky surveys — conducted at telescopes in two continents, covering one-third of the visible sky, and requiring almost 1,000 observing nights – to prepare for a new project that will create the largest 3-D map of the universe’s galaxies and glean new insights about the universe’s accelerating expansion.

This Dark Energy Spectroscopic Instrument (DESI) project will explore this expansion, driven by a mysterious property known as dark energy, in great detail. It could also make unexpected discoveries during its five-year mission.

An extensive analysis of four different phenomena within the universe points the way to understanding the nature of dark energy, a collaboration between more than 100 scientists reveals.

Dark energy – the force that propels the acceleration of the expanding universe – is a mysterious thing. It’s nature, write telescope scientist Timothy Abbott from the Cerro Tololo Inter-American Observatory, in Chile, and colleagues, “is unknown, and understanding its properties and origin is one of the principal challenges in modern physics”.

Indeed, there is a lot at stake. Current measurements indicate that dark energy can be smoothly incorporated into the theory of general relativity as a cosmological constant; but, the researchers note, those measurements are far from precise and incorporate a wide range of potential variations.

One of the top goals in cosmology today is understanding the dark energy that is responsible for the accelerated expansion of the Universe. Is the dark energy consistent with the cosmological constant of general relativity—representing a constant energy density filling space homogenously? Or can we find deviations from general relativity on cosmological scales that suggest a more complex nature for gravity? Questions like these motivate the current and next generations of surveys that aim to map out ever larger volumes of the Universe, using a wide variety of probes to constrain the properties of dark energy. The Dark Energy Survey (DES) has now derived such constraints from the combined analysis of four canonical observables related to dark energy: supernovae, baryon acoustic oscillations, gravitational lensing, and galaxy clustering [1]. The resulting bounds confirm what we knew from previous studies, which focused on single probes. But the results indicate that this multiprobe approach could allow surveys in the 2020s to improve such constraints by orders of magnitude, possibly bringing us close to solving the dark energy puzzle.

Supernovae, Dark Energy, and the Fate of Our Universe

What’s the eventual fate of our universe? Is spacetime destined to continue to expand forever? Will it fly apart, tearing even atoms into bits? Or will it crunch back in on itself? New results from Dark Energy Survey supernovae address these and other questions. At present, the fabric of our universe is expanding — and not only that, but the its expansion is accelerating. To explain this phenomenon, we invoke what’s known as dark energy — an unknown form of energy that exists everywhere and exerts a negative pressure, driving the expansion. Since this idea was first proposed, we’ve conducted decades of research to better understand what dark energy is, how much of it there is, and how it influences our universe.

Distance measurement is an important challenge in astronomy. Between the parallax of nearby stars and the redshift of the most distant galaxies, there are a lot of steps. With the Dark Energy rush, several large astronomical surveys are trying to understand the accelerated expansion of the universe. The Dark Energy Survey (DES) has just completed its observations last January, cataloging hundreds of millions of galaxies.

Obtaining precise distance measurements of such a large number of galaxies is a hard task. To address this problem, photometric redshifts (photo-z’s) have been largely used by the astronomical community. Although less accurate than spectroscopic ones, they are cheaper and faster (regarding the number of galaxies measured per exposure time) and, hence, allow observations to go beyond signal-to-noise ratio limits of spectroscopic observations. 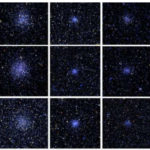 Caught in a cosmic dance, our nearest neighbor galaxies, the Magellanic Clouds, are cartwheeling and circling each other as they fall toward our galaxy, the Milky Way. The gravitational interaction between the Clouds sparks cosmic fireworks—bursts of star formation as new clusters of stars flame on. How many and what kind of star clusters have been born this way over the history of the Clouds? A new project, the Local Group Cluster Search, invites citizen scientists to help find out!

In contrast to the earliest studies of star clusters in the Magellanic Clouds, which used images captured on glass photographic plates, SMASH was carried out using the Dark Energy Camera (DECam), a 570-megapixel digital camera on the Blanco 4-m telescope at National Science Foundation’s (NSF) Cerro Tololo Inter-American Observatory in Chile. Using DECam, astronomers obtained images that not only cover the full extent of the two galaxies but also are more sensitive to faint stars than any previous wide-field optical survey of the Clouds.

For the past six years, the Department of Astronomy and the National Center for Supercomputing Applications (NCSA) at the University of Illinois have been closely involved with one of the most sensitive and comprehensive surveys of distant galaxies ever performed. Now that the survey is complete, they will analyze the vast amounts of data that’s been collected to better understand our universe.

In January, the Dark Energy Survey (DES) stopped collecting data after scanning a quarter of the southern skies and cataloguing hundreds of millions of distant galaxies. Now, astronomers anticipate that they will continue to refine this data for use by scientists into 2021.

“DES is leading the way for data science intensive research at Illinois,” said Leslie Looney, chair of the Department of Astronomy. “This is really the beginning of a new revolution in astronomy— using a large amount of data to do fundamental astronomical science. We are developing new techniques that better utilize state-of-the-art computer science methods to analyze galaxies, stars, and many other types of objects.”

The Poetry Of the Dark Energy Survey

Bio: Rob Sparks is a Science Education Specialist at the National Optical Astronomy Observatory. A lifelong astronomy enthusiast, he earned a B.A. in physics at Grinnell College and his M.S. at Michigan State University. He taught high school physics, math and astronomy for 11 years at schools on St. Croix, Florida and Wisconsin. He spent the 2001-2002 school year working on the Sloan Digital Sky Survey as a recipient of the Fermilab Teacher Fellowship. He spent the summer of 2003 at the National Radio Astronomy Observatory as part of the Research Experience for Teachers. He has been working as a NASA Astrophysics Ambassador since 2002. He was a member of the Galileoscope Working Group for the International Year of Astronomy.

Amy Catanzano is a writer and poet who teaches at Wake Forest University. She works extensively on poetry involving different scientific disciplines and has published three books of poetry

Dark Energy May Be Incompatible With String Theory

Since 1998, telescope observations have indicated that the cosmos is expanding ever-so-slightly faster all the time, implying that the vacuum of empty space must be infused with a dose of gravitationally repulsive “dark energy.”
In addition, it looks like the amount of dark energy infused in empty space stays constant over time (as best anyone can tell).
But the new conjecture asserts that the vacuum energy of the universe must be decreasing.

Paul Steinhardt, a cosmologist at Princeton University and one of Vafa’s co-authors, said that over the next few years, “all eyes should be on” measurements by the Dark Energy Survey, WFIRST and Euclid telescopes of whether the density of dark energy is changing. “If you find it’s not consistent with quintessence,” Steinhardt said, “it means either the swampland idea is wrong, or string theory is wrong, or both are wrong or — something’s wrong.”

« The dark-energy deniers
The Poetry Of the Dark Energy Survey »