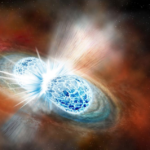 In a First, Gravitational Waves Linked to Neutron Star Crash

The stunning find is already helping astronomers resolve a heated debate about the cosmic origins of gold and silver.

Around 130 million years ago, two dead stars violently collided and set off a sequence of events that, over the last two months, have whipped astronomers on Earth into an absolute frenzy.

First theorized by Albert Einstein in 1916, gravitational waves are kinks or distortions in the fabric of spacetime caused by extremely violent cosmic events. Until now, all confirmed detections involved a deadly dance between two black holes, which leave no visible signature on the sky.

But with this latest event, teams using about a hundred instruments at roughly 70 observatories were able to track down and watch the cataclysm in multiple wavelengths of light, allowing astronomers to scrutinize the source of these cosmic ripples for the first time. 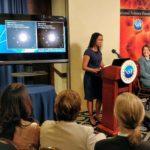 Aug. 17 marked a landmark discovery in the field of astrophysics, in which a collective of scientists across the globe observed the first record of both gravitational waves and light from an ancient cosmic collision. One of those scientists, Prof. Marcelle Soares-Santos (PHYS), spoke at an official press conference at the National Press Club in Washington, D.C. yesterday, together with other scientists representing the 70 ground- and space-based observatories that aided in confirming the unprecedented observation. Approximately 130 million years ago, two neutron stars started spiraling together closer and closer, releasing high-energy gravitational waves that stretch and ripple spacetime. Their eventual collision led to a ‘kilonova,’ a fireball emitting gamma-rays that arrived to Earth as a distant and transient blue-to-red flash of light beginning on the morning of Aug. 17.

LIGO-Virgo gravitational wave data was analyzed with optical detections from telescopes around the world, like Soares-Santos’s DECam in Chile, to confirm the event. “This telescope and camera system allows us to search large areas in a short period of time. In other words, it allows us to search the entire localization area of an event and allows us to determine where the source is located,” said Soares-Santos. Soares-Santos said her team’s strategy was to use the camera to map out the entire region and localize occurrence with overlapping exposures, explaining, “This enables us to determine what is the optical counterpoint and enables [us] ultimately to perform a number of scientific endeavors. … the closest to my heart is cosmology, which is the goal of the dark energy survey and my own in terms of science.” 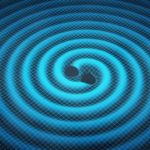 Nobel laureate to lead ‘a night in the deep beyond’

Gravitational waves, black holes and a possible ninth planet beyond Pluto will be discussed at a free public event at The University of Queensland on November 7.

University of Michigan astrophysicist and dark energy researcher Professor David Gerdes is using Dark Energy Survey data to discover hundreds of new small icy worlds in our solar system beyond Neptune. His team’s discoveries have raised the possibility that the solar system harbors a distant Neptune-sized planet with a 20,000-year orbit.

Fermi National Accelerator Lab researcher Professor Marcelle Soares-Santos detects dark matter by the way it bends light from background galaxies and uses the Dark Energy Camera to search for the optical signatures of gravitational wave events seen by the LIGO (US)/Virgo (Europe) interferometer detectors. She will report on the recent discovery of the first event for which both gravitational and electromagnetic radiation has been detected, a binary neutron star merger a hundred and thirty million light years away. 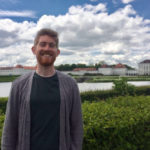 The Derry man, a former pupil of Foyle College in the city, was part of a team at the Harvard-Smithsonian Centre for Astrophysics (CfA) in Boston, who have newly discovered that almost all of the heavy elements on earth, such as gold, were actually created by two neutron stars colliding eons ago.

The discovery came about when, on August 17, 2017, the Advanced Laser Interferometer Gravitational-Wave Observatory in Washington State, United States, detected a new gravitational wave source, dubbed GW170817 to mark its discovery date. Just two seconds later NASA’s Fermi satellite detected a weak pulse of gamma rays from the same location of the sky. Later that morning, LIGO scientists announced that two merging neutron stars produced the gravitational waves from GW170817. A few hours after the announcement Mr. Nicholl’s team used a powerful Dark Energy Camera on the Víctor M. Blanco Telescope in Chile to search the region of sky from which the gravitational waves emanated. “One of the first giant galaxies we looked at had an obvious new source of light popping right out at us, and this was an incredible moment,” said Mr. Nicholl. 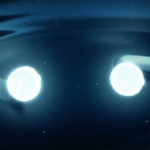 Scientists detect gravitational waves from a new kind of nova, sparking a new era in astronomy

Some 130 million years ago, in a galaxy far away, the smoldering cores of two collapsed stars smashed into each other. The resulting explosion sent a burst of gamma rays streaming through space and rippled the very fabric of the universe.

On Aug. 17, those signals reached Earth — and sparked an astronomy revolution.

The distant collision created a “kilonova,” an astronomical marvel that scientists have never seen before. It was the first cosmic event in history to be witnessed via both traditional telescopes, which can observe electromagnetic radiation like gamma rays, and gravitational wave detectors, which sense the wrinkles in space-time produced by distant cataclysms. The detection, which involved thousands of researchers working at more than 70 laboratories and telescopes on every continent, heralds a new era in space research known as “multimessenger astrophysics.” 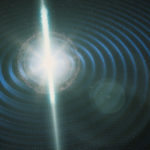 Today scientists announced the first verified observation of a neutron star collision. LIGO detected gravitational waves radiating from two neutron stars as they circled and merged, triggering 50 additional observational groups to jump into action and find the glimmer of this ancient explosion.

“It lasted for two weeks, and we observed it for about an hour every night,” says Jim Annis, a researcher at the US Department of Energy’s Fermi National Accelerator Laboratory, the lead institution on the Dark Energy Survey. “We used telescopes that could see everything from low-energy radio waves all the way to high-energy X-rays, giving us a detailed image of what happened immediately after the initial collision.” 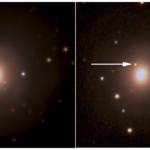 Researchers at the University of Portsmouth are part of the global announcement today of a new astronomical object, a kilonova – the cosmic explosion of two colliding neutron stars.

The kilonova was initially seen via a burst of gravitational waves (GW) – ripples in the fabric of space and time – on 17th of August 2017, which pinpointed the location of this event for telescopes across the world. Within hours of the GW detection by the LIGO and VIRGO observatories in California and the Italy, astronomers were pointing their telescopes at the possible source and found the new transient object in a nearby galaxy called NGC4993, only 130 million light years away.

“It doesn’t get more exciting that this for an astronomer,” says Bob Nichol, Director of the Institute of Cosmology and Gravitation (ICG) at the University of Portsmouth, and a member of the Dark Energy Survey (DES) that was part of the global search for this new object. “At sunset, the DES team was ready to scan the position of the gravitational waves for a new source”. 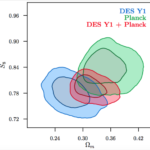 For decades, cosmologists have been attempting to piece together the history and composition of the Universe. This is a very difficult task because we know that ~95% of the Universe comes from the invisible “Dark Sector”, i.e. from dark matter and dark energy.

In a series of ten journal papers released on August 3rd, 2017, scientists from the international Dark Energy Survey (DES) collaboration shed new light on the Dark Sector. These insights were derived by applying a statistical technique known as two point correlation functions (or “2pt” for short) to an enormous catalog of galaxies. In fact, three different 2pt’s were used, two of which take advantage of the superb information that DES delivers about the shapes of galaxies. This shape information encodes clues to the dark matter distribution through the process of gravitational lensing. 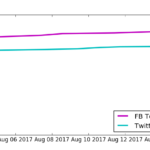 Earlier this month, DES released its first cosmology results and the largest and most accurate map of the Universe to date. This was made possible by the hours of work of hundreds of scientists collaborating together across the globe.

The necessary analysis to reach this milestone proved to be an important test of intellect, diligence, and perseverance for so many members of the collaboration. Such a significant scientific result, and the effort that went into producing it, needed to be shared around the world.

The task of spreading the DES Y1 results was undertaken by a small group of students and faculty. In this article is one reflection on this unique science communication experience.

With CMB telescopes vastly expanding our understanding of the early universe the past two decades, it was only a matter of time before we gained the capability to perform a census of the millions of galaxies at our disposal today using ground based telescopes. This is a very important step: studying today’s galaxies tells us whether the universe evolved after the CMB the way we think it did.
Today’s bite is not just about thanking the early universe for being kind in its evolution, but also an ode to the 400+ scientists working over the last two decades to bring this census to fruition!