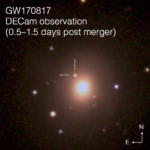 Before and after images of Galaxy NGC 4993, showing the appearance of the kilonova event.
The LIGO-VIRGO Collaboration (LVC) issued a trigger known as G298048 (later renamed to GW170817, according to the actual date of the event). A team of scientists using the Dark Energy Camera (DECam), the primary observing tool of the Dark Energy Survey, was among the first to observe the fiery aftermath of a recently detected burst of gravitational waves, recording images of the first confirmed explosion from two colliding neutron stars ever seen by astronomers. 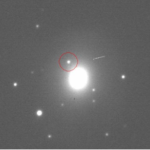 An event that blew away the astronomical world

On the morning of Thursday, August 17, 2017 the LIGO-Virgo Collaboration (LVC) gravitational wave detectors picked up a signal indicating a binary neutron star (BNS) collision. For the astronomers privy to the news of this detection, it was just the beginning of a momentous day.

Why was this day special? While LVC had detected four gravitational wave events already, they were all binary black hole (BBH) coalescence events. The discovery of gravitational waves was undoubtedly one of the biggest finds in the history of physics, but if there was any downside to those events, it was that BBH mergers were not expected to give off any electromagnetic radiation from radio, to visible light, to high energy gamma rays. Many astronomers pointed their telescopes towards these events just in case, including those of the Dark Energy Survey, but no light was seen. While this matched predictions, astronomers and physicists were left waiting for an even more exciting event, a gravitational wave detection from an event that could also be seen in the electromagnetic spectrum. The most likely candidate for such an event was a binary neutron star (BNS) collision. 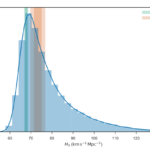 Gravitational waves tell us how fast the Universe is expanding

On August 17th 2017, three detectors on Earth observed a gravitational wave (GW) event known as GW170817. Scientists localised the origin of the event to a 30 square degree patch of the sky by observing the GW signal in the three locations (two LIGO detectors in the United States, and the recently commissioned VIRGO detector in Italy). For reference, that is sixty times the size of the full moon. Although that might sound large, in the emerging field of GW astronomy, 30 square degrees is an approximately tenfold improvement on what was possible before a third detector came online. Independently, the space based Fermi Gamma-Ray Burst Monitor (GBM) detected a gamma ray burst (GRB170817) less than two seconds after the GW event. 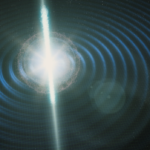 A team of scientists using the Dark Energy Camera (DECam), the primary observing tool of the Dark Energy Survey, was among the first to observe the fiery aftermath of a recently detected burst of gravitational waves, recording images of the first confirmed explosion from two colliding neutron stars ever seen by astronomers.

Scientists on the Dark Energy Survey joined forces with a team of astronomers based at the Harvard-Smithsonian Center for Astrophysics (CfA) for this effort, working with observatories around the world to bolster the original data from DECam. Images taken with DECam captured the flaring-up and fading over time of a kilonova — an explosion similar to a supernova, but on a smaller scale — that occurs when collapsed stars (called neutron stars) crash into each other, creating heavy radioactive elements. 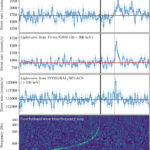 It is rare for the birth of a new field of astrophysics to be pinpointed to a singular event.

This focus issue follows such an event—the neutron star binary merger GW170817—marking the first joint detection and study of gravitational waves (GWs) and electromagnetic radiation (EM). It has long been suspected that the mergers of compact objects containing at least one neutron star produce a wide range of electromagnetic fireworks, spanning from radio waves to gamma rays. 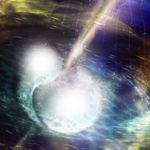 About 130 million years ago, two incredibly heavy, dense neutron stars spiraled around each other. Their dance brought them closer to one another and made them spin faster, until they were circling more than 100 times per second. The ensuing collision sent a shockwave through the very fabric of spacetime, which traveled across the universe at the speed of light until it rippled through the Earth at 7:41 a.m. Central time on Aug. 17, 2017.

“Any one of these findings would be groundbreaking on its own merits, and here we got all the pieces together in the span of 12 hours,” said Daniel Holz, an associate professor of physics and astrophysics who led the UChicago team, which was involved in both the LIGO and Dark Energy Survey discoveries. “This is akin to seeing the lightning bolt and hearing the thunder. We have just witnessed the birth of a new field of astronomy. It’s been an unbelievable few weeks.”

Holz is a co-author on 12 papers published Oct. 16 on the event, including a leading role in one published in Nature announcing an entirely new measurement of the rate at which the universe is expanding. 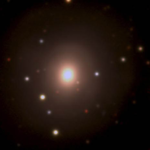 And University of Nottingham astrophysicist, Professor Christopher Conselice, from the School of Physics and Astronomy has played an important role in analysing the host galaxy where the gravitational waves occured, to help decipher the origin of the event.

The team of scientists using the Dark Energy Camera (DECam), the primary observing tool of the Dark Energy Survey, was among the first to observe the fiery aftermath of a recently detected burst of gravitational waves, recording images of the first confirmed explosion from two colliding neutron stars ever seen by astronomers. 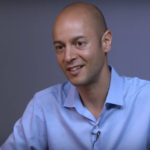 “It’s hard to describe our sense of excitement and historical purpose over the past couple of months,” said the leader of the team, CfA’s Edo Berger. “This is a once in a career moment — we have fulfilled a dream of scientists that has existed for decades.”

Gravitational waves are ripples in space-time caused by the accelerated motion of massive celestial objects. They were first predicted by Einstein’s General Theory of Relativity. The Advanced Laser Interferometer Gravitational-Wave Observatory (LIGO) made the first direct detection of gravitational waves in September 2015, when the merger of two stellar-mass black holes was discovered.

A few hours after the announcement, as night set in Chile, Berger’s team used the powerful Dark Energy Camera on the Blanco telescope to search the region of sky from which the gravitational waves emanated. In less than an hour, they located a new source of visible light in the galaxy NGC 4993 at a distance of about 130 million light years.

“One of the first giant galaxies we looked at had an obvious new source of light popping right out at us, and this was an incredible moment,” said Matt Nicholl of the CfA. “We thought it would take days to locate the source but this was like X marks the spot.” 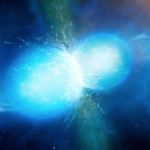 Scientists have detected the warping of space generated by the collision of two dead stars, or neutron stars.

They have confirmed that such mergers lead to the production of the gold and platinum that exists in the Universe. The measurement of the gravitational waves given off by this cataclysmic event was made on 17 August by the LIGO-VIRGO Collaboration. The discovery enabled telescopes all over the world to capture details of the merger as it unfolded. David Reitze, executive director of the LIGO Laboratory at Caltech in Pasadena, California, said: “This is the one we’ve all been waiting for.” 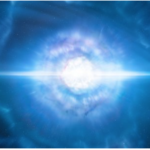 ESO’s fleet of telescopes in Chile have detected the first visible counterpart to a gravitational wave source. These historic observations suggest that this unique object is the result of the merger of two neutron stars. The cataclysmic aftermaths of this kind of merger — long-predicted events called kilonovae — disperse heavy elements such as gold and platinum throughout the Universe. This discovery, published in several papers in the journal Nature and elsewhere, also provides the strongest evidence yet that short-duration gamma-ray bursts are caused by mergers of neutron stars.