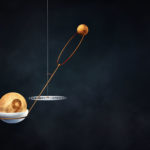 In early 2016, two planetary scientists declared that a ghost planet is hiding in the depths of the solar system, well beyond the orbit of Pluto. Their claim, which they made based on the curious orbits of distant icy worlds, quickly sparked a race to find this so-called Planet Nine — a planet that is estimated to be about 10 times the mass of Earth. “It has a real magnetism to it,” said Gregory Laughlin, an astronomer at Yale University. “I mean, finding a 10-Earth-mass planet in our own solar system would be a discovery of unrivaled scientific magnitude.”

Gerdes and his colleagues spotted the new object in data from the Dark Energy Survey, a project that probes the acceleration in the expansion of the universe by surveying a region well above the plane of the solar system. This makes it an unlikely tool for finding objects inside the solar system, since they mostly orbit within the plane. But that is exactly what makes the new object unique: Its orbit is tilted 54 degrees with respect to the plane of the solar system. It’s something Gerdes did not expect to see. Batygin and Brown, however, predicted it.

Brian Nord works in the deep skies lab on gravitational lensing at Fermilab. A gravitational lens is formed between a distant light source and an observer that bends the light from the source as it travels towards the observer. The amount of bending is one of the predictions of Albert Einstein’s general theory of relativity. Researchers can also use “lensing” as a measurement of how much dark matter there is in the universe. Between 1979 and now, only 1,000 such “lenses” have been discovered, but they predict significantly more of these observations will be found. The Dark Energy Survey (DES) uses the dark energy camera, and is predicted to have over 2,000 galaxy scale lenses in this survey. LSST was hinted to find potentially 120,000 of these types of events. This team also didn’t want to reinvent the wheel, and they also turned to AI techniques to help them. Using deep learning they found 8 new confirmed lenses, by looking at 100’s of square degrees of images. They use “ensembles of networks” and then use a simple majority vote to decide on which are lenses and which are not lenses. This specific technique of “jury vote” or consensus prediction is becoming very popular in a variety of fields to improve the quality of AI systems. 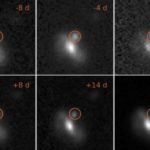 A supernova is one of the most impressive natural phenomena in the Universe. Unfortunately, such events are often brief and transient, temporarily becoming as bright as an entire galaxy and then fading away. But given what these bright explosions – which occur when a star reaches the end of its life cycle – can teach us about the Universe, scientists are naturally very interested in studying them.

Using data from the Dark Energy Survey Supernova (DES-SN) program, a team of astronomers recently detected 72 supernovae, the largest number of events discovered to date. These supernovae were not only very bright, but also very brief – a finding which the team is still struggling to explain. The results of their study were presented on Tuesday, April 3rd, at the European Week of Astronomy and Space Science in Liverpool.

The team was led by Miika Pursiainen, a PhD researcher from the University of Southampton. For the sake of their study, the team relied on data from the 4-meter telescope at the Cerro Tololo Inter-American Observatory (CTIO). This telescope is part of the Dark Energy Survey, a global effort to map hundreds of millions of galaxies and thousands of supernovae in to find patterns int he cosmic structure that will reveal the nature of dark energy. 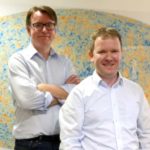 Meet the Portsmouth astronomers mapping out the universe

Professor Bob Nichol and Dr David Bacon, from the Institute of Cosmology and Gravitation, have played key roles in the Dark Energy Survey (DES).
Kick-started in 2003, the project has united more than 400 scientists from institutions in the United States, the United Kingdom, Brazil, Spain, Germany, Switzerland and Australia. And together, with internationally-sourced government and university funding, this crack team has built and used a 570-megapixel digital camera to carry out a deep probe of 5,000 square degrees – or one eighth – of the southern sky. 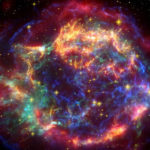 Designated DES16C2nm, the supernova took place 10.5 billion years ago when a massive star exploded at the end of its life. It is classed as a superluminous supernova (SLSN), the brightest and most rare of all supernovae.

“Such supernovae were not thought of when we started DES over a decade ago,” explained Bob Nichol, Director of the Institute of Cosmology and Gravitation at the University of Portsmouth in the UK.

“Such discoveries show the importance of empirical science; sometimes, you just have to go out and look up to find something amazing.”

Mathew Smith of the University of Southampton, also in the UK, and lead author of a paper on the findings published in the Astrophysical Journal, noted the rare finding gives astronomers better understanding of the rare superluminous supernovae. 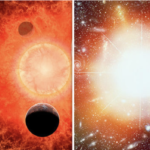 The colossal cosmic blast happened only 3.3billion years after the Big Bang, when the universe was a quarter of its current age, and light from the supernova has taken 10.5billion years to reach Earth – the Universe itself is thought to be 13.8billion years old.
The supernova, named DES16C2nm, was identified by a team led by Southampton University for the Dark Energy Survey (DES) – an international collaboration mapping far-off galaxies.
The team confirmed it is a superluminous supernova (SLSN) which is the brightest and rarest class and up to 100 times brighter than other types of stellar blasts.
Lead author Dr Mathew Smith said: “DES16C2nm is extremely distant, extremely bright and extremely rare – not the sort of thing you stumble across every day as an astronomer.
“It’s thrilling to be part of the survey that has discovered the oldest known supernova.
“As well as being a very exciting discovery in its own right the extreme distance of DES16C2nm gives us a unique insight into the nature of SLSN.” 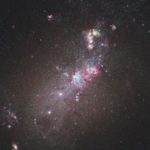 An international team of astronomers has discovered the oldest supernova ever detected — a huge cosmic explosion that took place 10.5 billion years ago. A supernova is the explosion of a massive star at the end of its life cycle.
The exploding star, named DES16C2nm, was detected by the Dark Energy Survey (DES), an international collaboration to map several hundred million galaxies in order to find out more about dark energy — the mysterious force believed to be causing the accelerated expansion of the universe.
As detailed in a new study published in The Astrophysical Journal, light from the event has taken 10.5 billion years to reach Earth, making it the oldest supernova ever discovered and studied. 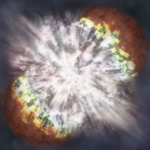 Astronomers Reveal Secrets of Most Distant Supernova Ever Detected

As detailed in a new study published in The Astrophysical Journal, light from the event has taken 10.5 billion years to reach Earth, making it the oldest supernova ever discovered and studied. The universe itself is thought to be 13.8 billion years old.

The research was led by Mathew Smith of the University of Southampton in collaboration with Chris D’Andrea, a postdoctoral fellow at Penn, and Masao Sako, an associate professor in Penn’s School of Arts and Sciences. Researchers at the University of Portsmouth also contributed to the research.

A supernova is the explosion of a massive star at the end of its life cycle. DES16C2nm is classified as a superluminous supernova, or SLSN, the brightest and rarest class of supernovae, first discovered 10 years ago. It is thought to be caused by material falling onto the densest object in the universe, a rapidly rotating neutron star newly formed in the explosion of a massive star. This violent explosion, Sako said, is brighter than even the brightest galaxies. 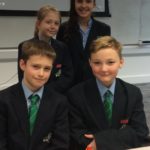 Pupils from Year 7 spent the day at the Falmer campus and enjoyed a tour by one of the university ambassadors and were able to ask questions about what life at university is like.

The day also involved a number of stargazing workshops using spectroscopes to identify different gases; group work on dark matter presented by the Dark Energy Survey; a lesson on exoplanets and how to spot them; and an amazing show in the planetarium. 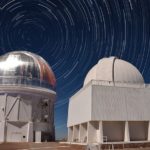 The Dark Energy Survey (DES), a project designed to explain cosmic expansion, has released its first three years of data. So far, the project has mapped 5,000 square degrees or about one-eighth of the sky.

DES is an international collaboration between over 400 researchers, including scientists from the University of Chicago Physical Sciences Division, Fermilab, and Argonne Laboratories. They have compiled a repository with nearly 400 million distinct catalogued objects detected from imaging.

Stellar streams are very difficult to detect because they are composed of stars spread out over large distances. Nora Shipp, a graduate student in the Department of Astronomy and Astrophysics, is leading the DES identification of new stellar streams, which affirms the DECam’s power. “These discoveries are possible because DES is the widest, deepest and best-calibrated survey out there,” Shipp said.