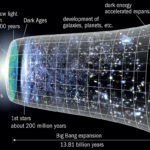 Make no mistake, dark energy – be it the cosmological constant or quintessence – is the leading theory with plenty of observational evidence to support it. The alternatives remain highly controversial. Yet those nagging questions just won’t go away. Upcoming surveys will either solidify dark energy theory’s position further, or produce a surprise by pulling the rug out from under it. With the Dark Energy Survey – an international collaboration using a 570-million-pixel camera called DECam on the Blanco 4 m telescope at the Cerro Tololo Inter-American Observatory in Chile – releasing its first data from a survey of 300 million galaxies, these are exciting times.

“What makes this a really fun field to be in is that I don’t know what the next big step will be,” concludes Riess. “We’re just in the middle of our initial reconnaissance, and I don’t think we should be surprised by surprises.” 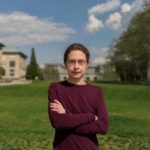 The Dark Energy Survey captures images of galaxies billions of light-years away to help our understanding of the evolution of the cosmos. Assessing these galaxies’ properties, such as their size, shape and distance from each other, is a painstaking process, one that involves not only collecting massive amounts of data, but also correcting for potential miscues that challenge the very act of assessing the data.

The Fermilab-led Dark Energy Survey aims to make unprecedented measurements of a phenomenon known as gravitational lensing. Gravity bends light produced by faraway galaxies, so images of galaxies are subtly distorted by the time they reach Earth. The degree of distortion itself can provide information about those galaxies, galaxy clusters and the universe around them. An important step in making accurate measurements of the universe is by successfully isolating these tiny distortions.

Simon Samuroff is the recipient of the 2017 URA Thesis Award, presented annually for outstanding work by a graduate student working at or in collaboration with Fermilab. In his thesis, titled “Systematic Biases in Weak Lensing Cosmology with the Dark Energy Survey,” Samuroff built computer simulations to model the shapes of galaxies captured by the Dark Energy Camera, which was built by Fermilab and is located at an observatory on a Chilean mountaintop. He closely compared thousands of the simulations to actual images to determine the amount by which scientists’ initial estimates of these distortions are incorrect. He singled out miscues so the Dark Energy Camera could make improved measurements and be more sensitive to subtle effects of phenomena such as dark matter.

“The committee was impressed by both the quality of writing and the magnitude of his study — cataloging millions of galaxies or clusters and taking very small effects into account,” said Fermilab scientist Lenny Spiegel, chair of the URA Thesis Award Committee. “His work is invaluable to scientists studying mysteries regarding astrophysics, which may ultimately point the direction for future progress in particle physics.”

One of Samuroff’s major results showed that interactions between the images of neighboring galaxies that overlapped affected scientists’ measurements more severely than they realized. By identifying where and to what degree distortions like this cause inaccuracies, Samuroff helps scientists create a more reliable system of measurement. 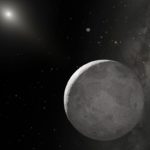 The discovery of a distant Kuiper Belt Object (KBO) with an extremely eccentric orbit could be evidence that a giant planet is waiting to be discovered in the outer solar system.

KBO BP519 was discovered by scientists analyzing data collected by the Dark Energy Survey, which observes a region far above the orbital plane of most of the solar system’s planets as part of a project to measure acceleration of the universe’s expansion.

It orbits the Sun at a tilt of some 54 degrees from the plane of the inner solar system planets’ orbits.

Like several other KBOs found in 2016, which all orbit at the same unique angle to the plane of the inner planets, 2015 BP519’s position suggests it is being influenced by the gravitational pull of a much larger object, sometimes referred to as “Planet X” or “Planet Nine,” which may be shepherding it and the other above KBOs into this strange orbit.

Since the 2016 discovery of these KBOs orbiting at the same distinct angle, scientists have been searching for a hypothesized large planet influencing their orbits, which could be either a super-Earth or a gas giant.

One possibility is 2015 BP519, described as “the most extreme Trans-Neptunian Object discovered to date,” is actually a moon of the large planet, which some astronomers estimate to be ten times as massive as the Earth. 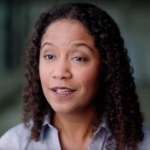 ‘Nova Wonders’ Asks ‘What’s the Universe Made Of’ Tonight

When gravitational-wave detectors recorded a distant collision of two neutron stars, astronomers around the world got the call and began to search for visible evidence of the crash. A team in Chile from the Dark Energy Survey — as well as other groups — was able to detect the so-called kilonova’s light, providing the first-ever observations of both light and gravitational waves from the same cosmic explosion.

For the Dark Energy Survey crew, these observations will help gauge the universe’s expansion rate, aiding their investigation into the mysterious dark energy pushing the universe apart.

“What’s the Universe Made Of” digs deep into two cosmic mysteries — dark matter and dark energy — showing how researchers know those entities exist, but also revealing that they are still trying to learn what they’re made of and how they work. 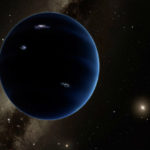 It has been described as hiding in plain sight, a planet 10 times as massive as Earth and orbiting the Sun beyond Neptune. Predicted in a series of studies over the last few years, Planet Nine of the solar system — if it exists — continues to elude, and yet intrigue, with clues suggesting that it is indeed out there.

The latest pointer comes from another object in the outer Solar System, called 2015 BP519. This one is certain: it was discovered during the international project Dark Energy Survey. In a paper on a preprint archive reporting the discovery, a large team of scientists has concluded that 2015 BP519 “adds to the circumstantial evidence for the existence of this proposed new member of the Solar System”. 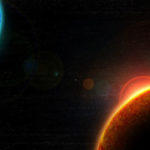 Researchers have been on the lookout for “planet nine” since early 2016 when astronomers first spotted a group of objects orbiting at an odd angle well past Neptune.

“It’s not proof that Planet Nine exists,” David Gerdes, an astronomer at the University of Michigan and co-author of the paper, told Quanta Magazine.

“But I would say the presence of an object like this in our solar system bolsters the case for Planet Nine.”

2015 BP519 was found using data from the Dark Energy Survey, an ongoing project investigating the expansion of our universe by looking into deep space.

The story actually starts with another celestial object: 2015 BP519. The team of researchers notes that the object, classified as an “Extreme Trans-Neptunian Object” due to its size and distance from the Sun, has been on the team’s radar since 2014. The massive team of astronomers spent 1,110 days tracking the orbit of 2015 BP519 (which honestly should also be declared a planet or something just so it can be named after a Roman deity and not a bunch of numbers and letters) as part of the Dark Energy Survey Collaboration using a Dark Energy Camera from an observatory in Chile. BP519 caught their attention because it has a weird orbit. Researchers found that 2015 BP519 travels as far as about 450 times the distance between the Sun and Earth, and it also has the most inclined orbit of any known Extreme Trans-Neptunian Object, traveling almost perpendicular to the rest of the planets and objects in our solar system. This strange orbit is an anomaly in the solar system. 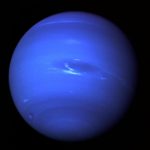 The paper’s authors describe the new object as the “most extreme” Trans-Neptunian Object “discovered to date.” In plain English, that means it has the wonkiest orbit of any object past Neptune.

The new object was discovered using data from The Dark Energy Survey, an ongoing project investigating the expansion of our universe by looking deep into space.

The planets we know about all orbit the sun at the same angle, called the orbital plane, because of the sun’s gravitational pull. Because The Dark Energy Survey is examining a different plane, scientists did not expect to find any orbiting objects in the data.

The orbit of 2015 BP519 is tilted 54 degrees from our orbital plane, according to the paper. A likely explanation is that a giant ghost planet is tilting the object’s orbit.

Models suggest it would take this hypothetical Planet Nine 10,000 to 20,000 years to complete one rotation around the sun.

Two years ago, scientists from the California Institute of Technology (Caltech) found evidence to suggest that a mysterious planet larger than Earth could be hiding beyond the orbit of Pluto, in the furthest reaches of the Solar System.

While the researchers didn’t directly observe the hypothetical ninth planet—otherwise known as Planet Nine—they did predict its existence based on the strange orbits of a handful of so-called Trans-Neptunian objects (TNOs)—distant, icy worlds located beyond the orbit of Neptune. These TNOs are clustered together in a way that is extremely unlikely to have occurred by chance, indicating the presence of a planet-sized object that is influencing their orbits through its gravitional pull, the theory goes.

Since this discovery, scientists around the world have scrambled to investigate the predictions, but Planet Nine has remained elusive. Now, an international team of researchers has reported the discovery of another distant world with an extraordinary orbit—referred to as 2015 BP519—which, they say, bolsters the case for the ninth planet.

In a new paper, published on the online preprint server arXiv.org, the team described how it uncovered the space object in 2014 using data from the Dark Energy Survey (DES)—an international, collaborative effort to map a vast region of the skies and reveal the nature of the mysterious force that is accelerating the expansion of the universe, known as dark energy. 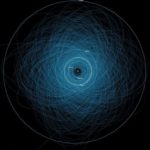 These space rocks, which orbit uncomfortably close to our planet, were spotted just once by scientists.

Researchers were unable to continue tracking them, which means they have no way of knowing if they are on a collision course with Earth.

Despite fears they could smash into Earth, experts say there is a ‘low chance’ of of surprise near-Earth asteroids causing damage.

To make their finding the team looked at data from some of Earth’s most prolific asteroid hunting systems, including Pan-STARRS, the Catalina Sky Survey, the Dark Energy Survey, and the Space Surveillance Telescope.