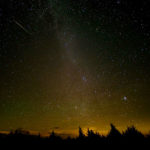 The faintest dwarf satellite galaxy in the Milky Way has been discovered by an international team of researchers. Aside from the Virgo I, the only other dwarf satellite galaxies to be categorized as ultra-faint are the Segue I and the Cetus II, which were discovered through the Sloan Digital Sky Survey and the Dark Energy Survey, respectively. 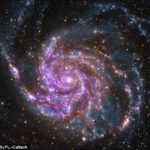 Is gravity an ILLUSION? Controversial new theory for the force could help explain why we can’t find dark matter

Dark matter makes up roughly 27 per cent of the mass of the universe, and it does not reflect light.

It can’t be seen directly with telescopes, but astronomers infer its presence because of the gravitational effects it has on the matter we can see.

Now a controversial new theory claims it can explain the mysteries answered by dark matter in a totally different way – by reworking our understanding of gravity. 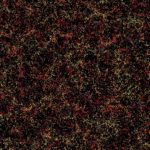 The map of the universe that could help confirm Einstein’s theory of General Relativity: Stunning image reveals voids and superclusters in unprecedented detail

Astrophysicists have discovered the key to precisely measuring the ‘stretching’ effect of the universe’s dark energy, helping to solve a long-standing cosmological mystery.
Using the largest map ever created of these features, researchers have developed a new way to detect the imprints of the Sachs-Wolfe effect on the cosmic microwave background, the ‘relic radiation’ left behind from the Big Bang.
The accepted model of cosmology says the competing forces of dark matter and dark energy have driven the evolution of the universe.
‘The universe is not only expanding, but it is expanding faster and faster as time goes by,’ Dr Kathy Romer, scientist at the Dark Energy Survey told MailOnline. 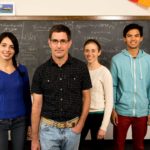 Astronomers at the University of Michigan and their colleagues on the Dark Energy Survey have discovered a new dwarf planet that’s more than 90 times farther from the sun than Earth is, making it the second-most distant minor planet in the known solar system.

The Dark Energy Survey, which uses a powerful digital camera called DECam on a 4-meter telescope in Chile, was designed to capture images of distant galaxies to understand why the expansion of the universe is accelerating.

“But the same sensitivity that makes this a state-of-the-art survey of the distant universe also makes it a powerful tool to look for new objects in our own cosmic backyard,” said David Gerdes, the U-M physics and astronomy professor who led the planet-finding team.

The DES images are sensitive enough to detect the reflected sunlight from the new object, which is as faint as a single candle 100,000 miles away. 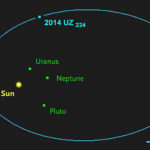 DES discovers a distant dwarf planet in our solar system

2014 UZ224 is a distant dwarf planet discovered by the Dark Energy Survey (DES). It’s located in the region of the solar system beyond Neptune known as the Kuiper Belt, and is presently more than 90 astronomical units (AU), or nearly 14 billion km, from the sun. The earth is 1 AU from the sun, so this is one of the most distant solar system objects we know about. Among known solar system objects with well-determined orbits, only the dwarf planet Eris is currently more distant. Light from 2014 UZ224 takes 12.5 hours to reach us. 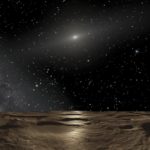 A Friend For Pluto: Astronomers Find New Dwarf Planet In Our Solar System

Scientists in Michigan have found a new dwarf planet in our solar system.
It’s about 330 miles across and some 8.5 billion miles from the sun. It takes 1,100 years to complete one orbit.
But one of the most interesting things about the new object, known for the time being as 2014 UZ224, is the way astronomers found it.
David Gerdes of the University of Michigan led the team that found the new dwarf planet. Gerdes describes himself as “an adult-onset astronomer,” having started his scientific career as a particle physicist. 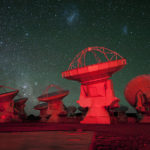 The Large Magellanic Cloud (LMC) is a satellite dwarf galaxy of the Milky Way and one of the closest galaxies to Earth and recent research conducted by an international team of astronomers have found that the LMC could potentially have its own disrupting satellite galaxy known as SMASH 1.

With the aid of the Dark Energy Camera (DECam), mounted in the CTIO Blanco 4-meter telescope at Kitt Peak, the team whose lead author on the recent research paper is Nicolas Martin from the Observatoire astronomique de Strasbourg, France, found within the Survey of the Magellanic Stellar History (SMASH), a very faint stellar system approximately 16 kilo parsecs from the LMC. 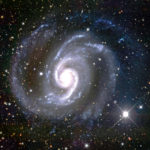 It outweighs everything else in existence, it governs the fate of the Universe and it cannot be explained by known physics.

Dark energy is the name physicists use for whatever substance, force or property of space is messing with the Universe, making its expansion accelerate. As yet, we know almost nothing about it, which has allowed theories about it to multiply uncontrolled. But astronomers are training an impressive array of instruments on the problem. Telescopes and radio detectors are tracing out more and more of the Universe in the hope of finding a fingerprint of dark energy. Space agencies are planning two missions to examine the stuff. The most violent of all stellar explosions could provide insight into its influence on the early Universe. And a new branch of astronomy may also have a part to play, as gravitational-wave detectors begin to listen for the effect of dark energy on the echoes of colliding black holes. 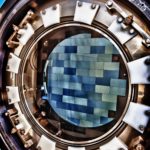 Seven years into his career as a newspaper photographer, Reidar Hahn had grown tired of hustling at all hours of the day and night. So when he heard about a job opening for a photographer at Fermi National Accelerator Laboratory (Fermilab) nearly three decades ago — then home of the planet’s most powerful atom smasher, the Tevatron — he applied. 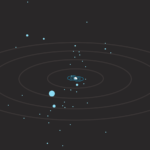 Imagine a mansion. Now picture that mansion at the heart of a neighborhood that stretches irregularly around it, featuring other houses of different sizes—but all considerably smaller. Cloak the neighborhood in darkness, and the houses appear as clusters of lights. Many of the clusters are bright and easy to see from the mansion, but some can just barely be distinguished from the darkness.