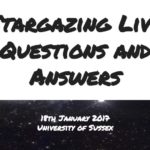 Earlier this year, the University of Sussex Department of Physics and Astronomy held Stargazing Live, a night of astronomy-themed events … Read more » 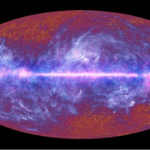 Researchers finally set to test Einstein’s concept of the Cosmological Constant: Groundbreaking gravitational wave experiment could help us understand the expansion of the universe

If gravitational waves – space-time ripples traveling through the universe – are found to travel at the speed of light, there would be no need for alternative gravity theories, they say.

This means dark energy would also be ruled out as an explanation, thus supporting Einstein’s theory.
But, if the speed of the gravitational waves is different from that of light, Einstein’s theory must be revised, they say.

WHAT IS DARK ENERGY
Dark energy is a phrase used by physicists to describe a mysterious ‘something’ that is causing unusual things to happen in the universe.

‘The universe is not only expanding, but it is expanding faster and faster as time goes by,’ Dr Kathy Romer, scientist at the Dark Energy Survey told MailOnline. 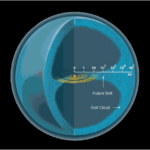 stronomers have discovered a trans-Neptunian object (TNO) – most likely a dwarf planet – at the edges of the Solar System, making it the second-most distant TNO currently known.

The large international team that discovered it, whose lead author on the research paper is D W Gerdes from the University of Michigan, USA, found DeeDee using data from the Dark Energy Survey (DES), with followup measurements by the Atacama Large Millimetre/Submillimetre Array (ALMA).

The Dark Energy Survey is an optical survey of 5000 square degrees of the southern sky and despite being used primarily for cosmological purposes, its broad off-ecliptic coverage means it is very well-suited to spotting objects within the scattered disk and other high-inclination TNO populations from the inner Oort cloud. 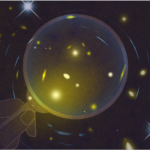 The newest telescopes, such as the Dark Energy Survey, which uses a 4-meter telescope in northern Chile and covers about one quarter of the southern sky, take millions of images of a variety of celestial objects. These often include visual distortions, cosmic rays and satellite trails that make them difficult to interpret. Deep learning could help process this deluge of data quickly.
“Astronomy is the next frontier to take it on,” said Brian Nord, an astrophysicist at Fermilab in Batavia, Illinois.
Nord is one of a group of astrophysicists who search for rare gravitational lenses with signs of curved slivers of light or duplicated images that indicate the presence of massive objects skewing light rays. The scientists often have to sift through numerous images by eye, one at a time. But now they have a potentially game-changing technique at their disposal. 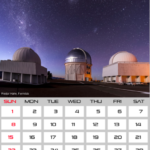 Happy New Year from the Dark Energy Survey!     We’re excited to share the 2017 edition of the DES … Read more » 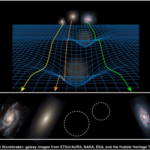 Was Einstein WRONG about gravity? Controversial new theory that could rewrite physics passes its first test

Dark energy is a phrase used by physicists to describe a mysterious ‘something’ that is causing unusual things to happen in the universe.
‘The universe is not only expanding, but it is expanding faster and faster as time goes by,’ Dr Kathy Romer, scientist at the Dark Energy Survey told MailOnline.
‘What we’d expect is that the expansion would get slower and slower as time goes by, because it has been nearly 14 billion years since the Big Bang.’
Coming up with an equation of state would give the researchers clues about what is making up this mysterious force.
At the moment the favourite candidate is called the ‘cosmological constant’ – which has a relatively boring equation of state.
‘But, despite its simplicity, the cosmological constant is not the “something” that scientists are hoping for,’ Dr Romer said, ‘a cosmological constant then messes up other parts of physics.’
‘It’s like a table plan at a wedding: you think you’ve got it all sorted out and then you notice that, because the caterers gave you a round table instead of a long one, your Dad is now going to be sitting next to your Mum’s new boyfriend.’ 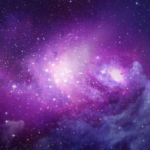 Dark matter may not be staying in the dark too much longer. Since GridPP was a critical part of the computing grid that unmasked the Higgs Boson—that ever-elusive “God Particle” that explains why some particles that the laws of physics insist aren’t supposed to have mass somehow do against the odds—at the European Organization for Nuclear Research, aka CERN. GridPP’s stellar résumé means you can trust it to find (almost) improbable things in space. Similar resources will process infinite images and algorithms from the Dark Energy Survey. While DES sounds more like an underground detective unit than anything related to astronomy or astrophysics, it is actually an international effort to map galaxies, seek out supernovae and shine new understanding on dark matter. 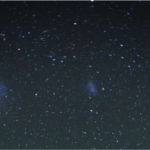 Thanks to scientists on the Dark Energy Survey (DES), the solar system just got another member.
DES scientists recently reported the discovery of a potential dwarf planet located 92 times farther from the sun than the Earth is, more than twice as distant as Pluto. The new dwarf planet was discovered using the Dark Energy Camera, a scientific instrument built at Fermilab to probe the mystery of dark energy. But as scientists on the DES collaboration can attest, DECam turns out to be a powerful tool for astronomy as well as cosmology. 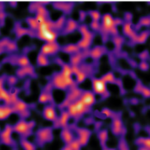 The large-scale distribution of dark matter in the universe is less clumpy than expected. That surprising conclusion is based on a thorough statistical analysis of the shapes of some 15 million remote galaxies.
The other two large cosmic shear surveys — the Dark Energy Survey (DES) at the 4-meter Blanco telescope at the Cerro Tololo Inter-American Observatory, also in Chile, and the Hyper Suprime-Cam (HSC) survey on the Japanese 8.2-meter Subaru telescope at Mauna Kea, Hawai‘i — haven’t published definitive results on this topic so far, though the DES did release analysis of preliminary “science verification” data that’s roughly consistent with the KIDS result.

Currently, some 50 satellite galaxies of the Milky Way have been identified. About 40 of them are faint and diffuse and belong to the category of so-called “dwarf spheroidal galaxies.” Many recently discovered dwarf galaxies, especially those seen in systematic photometric surveys such as the Sloan Digital Sky Survey (SDSS) and the Dark Energy Survey (DES) are very faint with absolute luminosity in the optical waveband below -8 magnitude. These are so-called “ultra-faint dwarf galaxies.” However, previous searches made use of telescopes with a diameter of 2.5 to 4 meters, so only satellites relatively close to the Sun or those with higher magnitudes were identified. Those that are more distant or faint ones in the halo of the Milky Way are yet to be detected.